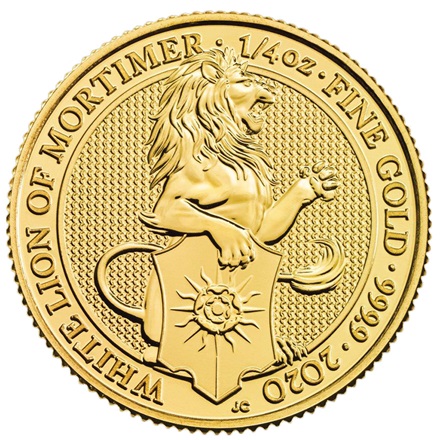 The series "The Queens's Beasts" contains ten different coins and is published by the English Royal Mint. The "White Lion of Mortimer" is, after the Falcon of the Plantagenets, the seventh motif in this series. The series is dedicated to the history of the English monarchy. By 2021, three more coins will be released, including "The White Horse of Hanover". The coin is considered the official currency in England and is characterized by a face value of 25 pounds.

The series of coins is inspired by the ancient symbols of the power and identity of the British kingdom. On the motif side, the white lion of Mortimer was placed, which goes back to the noble Anne Mortimer (1390 - 1411). She was a British nobleman and ancestor of the Royal House of York, which played an important role in the Rose Wars. Anne Mortimer was the mother of Richard, Duke of York and the grandmother of the British kings Richard III and Richard IV.

The sign on the coin shows a white rose encircled by a golden sun and is a combination of two different heraldic signs. Both appear on the Great Seals of Edward IV and Richard III and were used by George VI as Duke of York. Unlike the Lion of England, this animal is not crowned.

The front of the coin depicts the portrait of Queen Elizabeth II. Around the portrait you will find the inscription "D G REG F D" signifying Dei Gratia Regina, Fidei Defensor (Queen of God's Grace, Defender of the Faith). In addition, one finds the face value and small the letters "JC" for the designer of the coin Jody Clark.

We are happy to offer you our comprehensive advice on the topic 'buying and selling gold coins'. In addition to the Queen's Beasts series you will find a selection of prestigious gold coins from around the world. We guarantee the highest quality of gold coins distributed by us and work exclusively with globally recognized and established producers.

Convince yourself of our comprehensive product range: Visit us in one of our branches or buy gold coins online. At philoro EDELMETALLE GmbH you are certainly better advised! 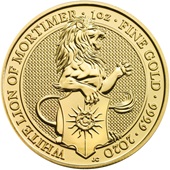