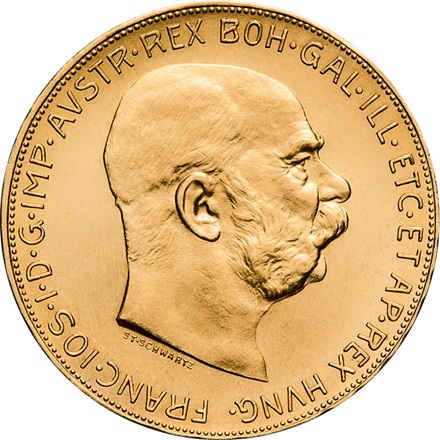 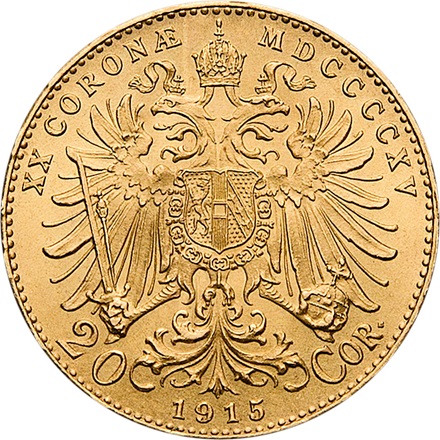 The great peculiarity of the Krone is that gold was considered as a unit of account, even though the Krone was a silver currency. Within the framework of the monetary reform of 1892, the Krone abolished the Gulden. From then on, there was the 10-Krone coin and the 20-Krone coin.

A few years later, a third coin followed: in 1908 the 60th anniversary of the government was celebrated by Emperor Franz Joseph. On this occasion, a 100-Krone gold coin was coined. This coin was coined from 1908 to 1914 and then again from 1923 to 1924. The head of the 3 coins shows the portrait of the former emperor of Austria, Franz Joseph I, better known as "Franzerl" or husband of "Sissi". Until the year 1915 Kronen were officially coined, therefore this date is also used on the current coinage.

We will be glad to offer you our gold coins and sell our comprehensive consulting services. In addition to the Gold 100 Kronen Goldmünze you will find a selection of renowned fine gold coins from all over the world. We guarantee the highest quality for the gold coins we distribute and work exclusively with well-established and established producers.

Just convince yourself of our comprehensive product range: Visit us at one of our branches or buy gold coins online. At philoro you are certainly better advised!