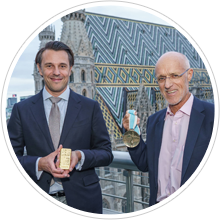 Also at the second GOLDEN.WINNER.DINNER. on September 19, 2020 at DO & CO on Stephansplatz in Vienna everything revolved around gold in a famous way: Olympic gold. Olympic champion, entrepreneur and trainer legend Toni Innauer was at the second GOLDEN.WINNER.DINNER. the star guest and chatted in a relaxed discussion with philoro managing director Rudolf Brenner about the current soaring of the gold price and about the fascination that gold exerts in its different forms - naturally with an emphasis on Olympic gold. The audience at this business and network event were invited guests from business and the media.

"Courage means that one's own actions must not be dictated by fear." (Toni Innauer on September 19th, 2020 when asked how he managed to race down a ski jump and show world-class performances despite his fear of heights.)


"Mister Skisprung", as Toni Innauer is deservedly called, let his Olympic gold medal from 1980 from Lake Placid (USA) pass around during the evening. The audience gained insights into his outstanding career as a ski jumper (2x gold at the Olympic Games and World Ski Championships in Lake Placid in 1980, several silver medals) but also as a ski flyer. His time as a successful trainer and sports director of the ÖSV from 1989 to 2010 was also discussed. Innauer's team was able to achieve many successes in the sports of ski jumping, cross-country skiing, Nordic combined and biathlon. 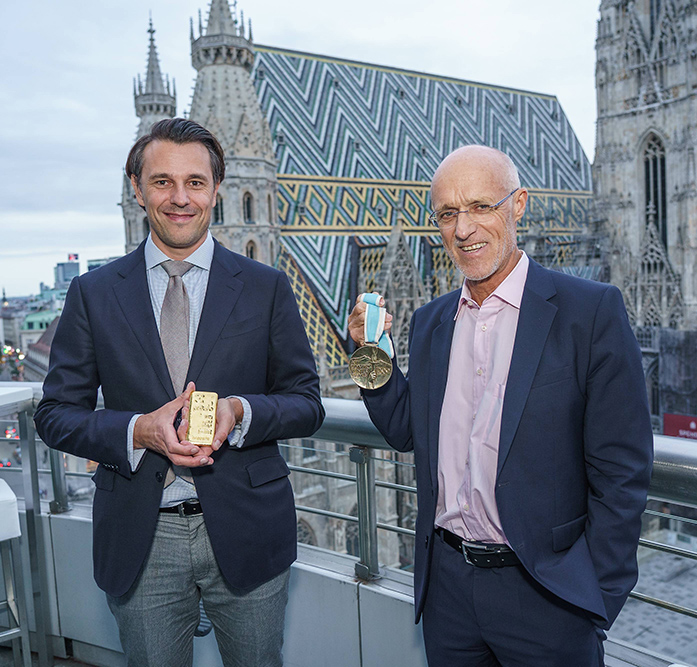 (Rudolf Brenner and Toni Innauer in front of the impressive backdrop of St. Stephen's Cathedral in Vienna. Photo: © Andreas Tischler)

Our branch at Pelikanstrasse 6/8 has been open since December 1st.

On May 27, 2020, the 14th edition of the annual "In Gold We Trust" report was published with the title "The Dawning of a Golden Decade". In 17 chapters and 352 pages, the authors Ronald-Peter Stöferle and Mark J. Valek analyze various influencing factors of the gold price. Download the complete report or the compact version here.