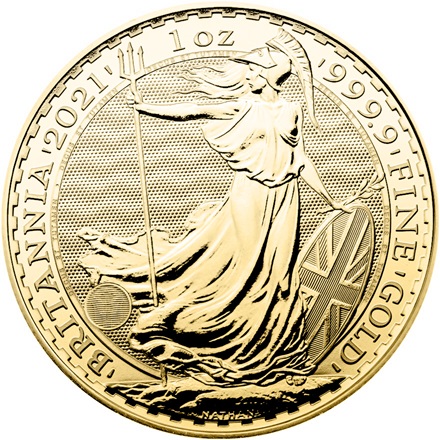 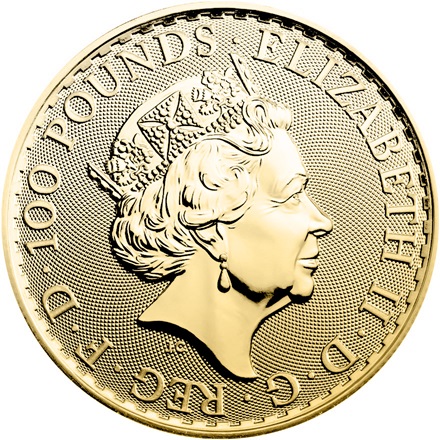 In stock, Delivery within 3 - 5 working days

Investment gold is tax-exempt according to § 6 Paragraph 1 Zi 8j UStG.

With the minting year 2021, the classic design of the gold coin Britannia by Philip Nathan was supplemented by new design elements and security features called "Bullion Security". The Gold Britannia is a British gold coin that has been minted by The Royal Mint since 1987 and at that time was the first European gold investment coin. The face value of the Britannia gold coin is denominated in British pounds. In Great Britain it is the official means of payment. Since 1987 the gold coin has been available in the sizes 1/10 ounce, 1/4 ounce, 1/2 ounce and 1 ounce. The fine gold content of Gold Britannia has been 999.9 since 2013. Before that, it was given as 916.7 - that's 22 carats. Until 1989, one twelfth of copper was used as an alloy, which gave the coin a reddish hue. After that, copper and silver were used in the same proportions. Since 1997, a silver coin has also been launched alongside the Britannia gold coin.

The motif side of the Britannia gold coin shows the Roman deity and personification of the country "Britannia" as a standing figure with a helmet, shield and trident. This motif remained unchanged until the turn of the millennium. Since 2001 the motif of the Gold Britannia has been changing in years with an odd year and remains the same in years with an even year. Therefore, some changes were made for the minting year 2021, which further enhance the motif of the coin. The background of the motif side is finished with a wave shape. Thanks to a special embossing technique, when the angle of view changes, it appears as if the waves are moving. In addition, the motif has been supplemented by a security feature, which shows a lock as a symbol of security when viewed from 90 degrees. If the viewer's perspective changes, the lock becomes a trident, one of the defining symbols of the Britannia coin. The new edition of the motif page is rounded off by the Latin word "DECUS ET TUTAMEN" for "fame and defense". The value side shows the famous portrait of Quenn Elizabeth II executed by Jody Clark. The portrait is surrounded by the words "ELIZABETH II - D-G-REG-F-D" and the nominal value of "100 POUNDS".

We are happy to offer you our comprehensive advice on buying and selling gold coins. In addition to the Gold Britannia 1/1 - 2021, you will find a selection of renowned fine gold coins from all over the world. We guarantee the highest level of quality for the gold coins we sell and work exclusively with globally recognized and established producers.

Convince yourself of our extensive product range: Visit us in one of our stores or buy gold coins online. With philoro you are definitely better advised!